Wednesday 1st May, launching not one but 2 books, Sara Grant threw a party for friends, family, publishers and a few bloggers/press on the 2nd floor of Waterstone’s Piccadilly, London.  A lovely party it was too, refreshments included some charming little cupcakes which Sara herself declined to eat not wishing to spoil her appetite for dinner but which the rest of us tucked into with delight!  Nothing however it seems can spoil Sara’s appetite for writing!

Having spent a number of years in the US working in PR it was moving to England that encouraged Sarah to take up her pen and begin writing.  Completing an MA in creative writing she went on to write her own titles for publication whilst setting up a number of groups – which she is still part of – for authors.  It is her unstinting support for others, her selfless and generous spirit and her friendship which always goes the extra mile which stand out for her publishers and agents and it is these qualities, along with the skill to write great stories, that she imbues her fiction with. 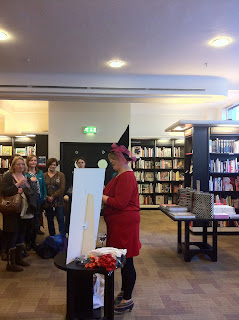 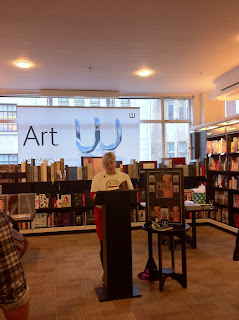 Versatile is the word which best sums Sara up and her Orion editor explained how lucky she felt to work with Sara.  Sara’s books fill a gap, catering for two age groups she displays a skill which is not often found in authors, many prefer and feel more comfortable in only one place!  Sara began with YA fiction but found herself naturally drawn to a younger age group too.  Working simultaneously she explained can be a challenge and can turn her from a monster to a delight depending on the stage of writing and the book!  To distinguish between her two roles last night she donned a witches hat complete with pink bow to read from Magic Trix, swapping to a smiley t-shirt for Half Lives, both outfits summing up characters from the books

Sara read from both books and explained what a delight it was to write Magic Trix – book 3 was launched and there are 6 planned (more if she is allowed!).  The aim was to try and make the reader laugh, if the giggles from the assembled group were a guide then she has got it right – and we were all adults!  Erica-Jane Waters, the Magic Trix illustrator was there too and Sara not only thanked her but explained how, with Erica’s amazing talent had captured the story so expertly even prompting a change in the text at times to suit the illustrations! 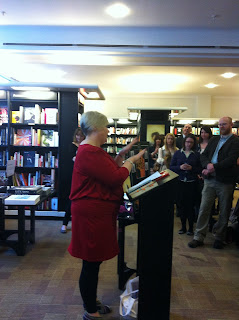 Before reading from Half Lives Sara explained that this YA novel was inspired by the ability of the human spirit to adapt and survive.  She has been thinking about it since 2009 after hearing about a nuclear power plant in the US and being asked if she would write something about the issue.  Inspiration struck and the story formed as Sara, fascinated by the idea of how the future would look and how we can communicate with them, began to write.  The story is about love, survival, language, belief and understanding ...

Sara was a wonderful host, chatting to everyone and trying to recall as many names as possible.  She oozes enthusiasm and warmth, read wonderfully and looked fetching in her special outfits.

A talented lady from whom we can hopefully expect to read more and who, for the time being has left us with two brand new books to get our teeth into.

As soon as she is back from a trip to America Sara will be writing a guest blog for us here at Armadillo so watch this space!
Posted by Unknown at 07:51