An Evening with Michael Grant

A balmy Wednesday evening in April.  Waterstones Piccadilly the venue, bloggers, fans of Michael Grant, children and adults alike gathered (I was lucky enough to have won a pair of tickets to the event) to hear Michael in conversation with one of his publishers.

Michael began with the shocking revelation that each of the 7 books in the Gone series has been written without a plan, without a sense of direction!  He has written 5 books in 6 years, a superfast output fuelled mostly by coffee.  His revelations did not however stop there.  Not only does he not plan in advance (though he does always send his publishers a vague outline to keep them happy!) he only writes for a few hours each day.  This was a revelation and also a refreshingly honest insight into the work and life of a writer – they are not all slaves to their desks, computers, notepads or even stories.  They do not all agonise over every word and every stage of the story.  So how does he do it? 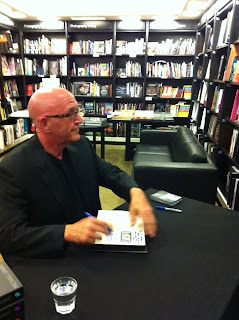 Michael begins with the title.  This is his guide to the way in which the story will develop.  There is then, in his own words, lots of faffing!  Lots of formatting.  The first page will be written.  The first 20-30 pages will then be written, they may not stay as the first pages but the bare bones of the story is now beginning to take shape.  A solid opening in place and the linear structure of the story continues, speed comes not only from coffee but also from experience – Michael has been writing for years (he was one of the authors of the Animorphs series among other books).

He has taken his inspiration from many place but particularly of interest was Disney films – the death of parents is a big inspiration ... Gone was therefore started on the principal that the parents were Gone from the outset!  He is also inspired by other authors – Stephen King, now a friend, has been a big inspiration for example.

Michael is often asked if the deaths in his stories are too gruesome, too inventive?  He just laughs at the level of gruesomeness and knows that the children who read his books will too – children don’t have the context that adults do, they love to be ‘grossed out’, they love to feel the power of their emotions, this is what Michael taps into with his books.  He explained that what he hopes he is doing is giving them the ability to feel – I think he is certainly doing that!

Having had many jobs and many experiences of life Michael explained that he always knew he would and could write, an ability he was born with, it was just finding the moment.  He began his writing career as a co-author with his wife using pseudonyms so that many, many books could be written!  Now he concentrates on his own work but the Gone series is certainly complete and new projects are on their way ... Messenger of Fear was one title mentioned ...

As we all look forward to completing the Gone series and the next book from Michael we must also thank him for providing such enthralling and gripping books for teens, for his enthusiasm for writing and for a great evening!