Add to that recent events including a chance for the London YLG to nominate their Carnergie and Greenaway titles, a recent author event witht he amazing and inspiring Leigh Bardurgo and much more to come it is time to sit back and find a few minutes to enjoy a simply incredible book...


With the incredible in mind this Blog (the content below is written by Armadillo reviewer Liz Bankes) looks at the simple yet amazing story of one boy...

My Brother Simple by Marie Aude Mareil (translated from the French by Adriana Hunter), published by Bloomsbury, Aug 2012

Kleber moves to the city with his brother Simple, who has learning difficulties. Kleber is determined, however difficult life on their own might be, that Simple is not going to live in an institution. Their new housemates all react differently to having Simple in their lives but it soon becomes clear that he’s changing everything – and he’s no i-di-ot.

My Brother Simple is one of those books that when you finish reading it, makes you feel 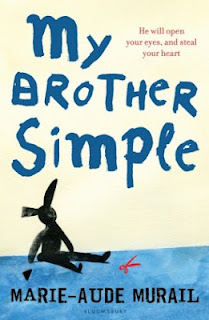 like you are in the finale of a film. You want to wave it aloft (probably while standing on a chair in a crowd place) and shout THIS BOOK IS INCREDIBLE, NOW YOU MUST READ IT while triumphant music plays.

It is one of those books that, when you meet someone else who has read it, results in this sort of conversation:
Oh I LOVE that book!
The bit when he–
YES! Oh and when him and girl and all the–
OH MY GOD I LOVED THAT BIT
I just found it really, yeah
YEAH it was so you know?
I KNOW EXACTLY WHAT YOU MEAN

And other people wonder what you’re on about, so you tell them to read it and then they do and they say OH MY GOD I KNOW EXACTLY WHAT YOU MEAN.

It is one of those books that reminds you that it is the way you treat people that matters. And that small gestures and acts of kindness can change the world.

It is one of those books that makes you very grumpy that you don’t live in Paris.

My favourite thing about this books is that it approaches life’s problems with humour, whether this is living with learning difficulties or just generally living with other people and learning to love them, understand them and treat them right. Each character has their own set of problems, habits and oddnesses that make up who they are and that create hilarious situations – even if they can only laugh about them afterwards. And of course once the characters have made you laugh, you immediately care A LOT about what happens to them.  The inhabitants of the Paris flat that Kleber and Simple move into climb up into your brain and live there, seeming utterly real, making you laugh out loud and, at moments, making you cry.

There’s Enzo, a lazy and irritable literature student for whom eating Nutella with a spoon is one of the day’s highlights – well, at least it distracts him from being painfully in love with his housemate, and best friend’s sister, Aria. Infuriatingly for Enzo, Aria and her boyfriend Emmanuel are the golden couple – good-looking, in love and training to be doctors, but Simple’s arrival has them at odds, hinting that things might not be so wonderful after all. Corentin is Enzo’s best friend and Aria’s brother, preoccupied with losing weight and getting a girlfriend, but can’t work out what’s holding him back. Kleber is the youngest and still at school. He’s having to juggle work, fancying girls and being responsible for his big brother. Simple is thrilled at his new home, living with his two favourite people – Kleber and Mister Babbit, his talkative toy rabbit. And there’s one thing he wants to know – he wants to know about love. Will his dysfunctional flatmates be the ones to teach him?

At the centre of the book is Simple. When Kleber explains to strangers, particularly ones that Simple has just threatened with his toy gun, that his brother has learning difficulties, Simple clarifies that he is ‘an i-di-ot’. Spelling it out like that shows the emptiness of the word – and how ridiculous it is to apply a word like that to the bundle of personality, experiences and details that is a person. Anyone that thinks of Simple as an idiot, a retard, or any other word, ignores the person and what he is capable of. The two girls Kleber fancies in his class – Beatrice and Zahra – illustrate this. One sees Simple as an annoyance and the other appreciates him for who he is.

Simple has a child’s view of the world. He sees things simply. He tells a woman in the street she is fat. He tells Aria she is beautiful, which is more than Enzo can do. He sees Enzo and Aria fighting and tells them fighting is wrong. They should make up. Reading it, we agree: they should make up and just bloody well admit they love each other. But it’s not that simple. However, Simple’s take on life has an effect on everyone. They think about what really matters and each in their own way has a realisation about their life. At the same time they realise that rather than trying to change him and make him admit that his beloved Mister Babbit is a toy, they should accept that he sees the world differently and let him discover things in the way that suits him. Trying to make someone ‘normal’ doesn’t really work when you realise that normal doesn’t really exist. It’s Simple really.