I spoke to Lucy about her book and the full interview can be found in the Spring Edition of Armadillo Magazine along with a review of the book too - here is a taster to whet your appetite and a question for you too!

Lucy, you are taking the theme of Bears, obviously, for your story.  What made you choose a bear and why do you think the bear is such a popular character for children’s fiction? Bears have always held a fascination for me as an adult - especially since I came in contact with real ones in the wild when I was staying in Colorado.  As for this particular book, my wonderful illustrator, Sarah Dyer,  showed me an adorable Bear with snipping scissors in her sketch book, and the story idea just came from that.
I suppose the whole bears-in-children's-fiction thing really took off after the advent of Teddy Bears in the early years of the twentieth century.  Before that there had been bears in folk tales, obviously, (Goldilocks, East of the Sun, West of the Moon etc), but as more and more children had bears as fluffy toys, I think they became less wild and scary and more of a ubiquitous symbol for a kind of friendly, cuddly bedtime comfort which has translated well into bearish picture book characters for younger readers ever since.

How long, from developing the idea, did it actually take you to write a story with which you were happy?  With this book, it was quite quick from development to a text my agent and I were happy to send out to a publisher - say a month or so.  Then there were the publisher's edits, which fine-tuned it into its current form.  But every picture book is different. Some you have to wrestle with for months, some only come right after they've lain in the bottom drawer for years and then they appear in a totally different form to the one you first imagined. 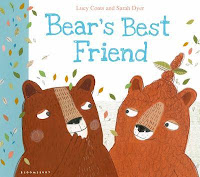 If you could create a named bear character what name would you give your bear and why?  The bear I take round to schools with me happens to be called Podge, and he belongs to my daughter. I've no idea why he's called that, except that he is fairly rotund around the middle. I should probably be picking a noble name, like Arcturus, but nope. Podge it is. It's a comfortable sort of name for a bear.  I should like to write a story about him one day - I expect one will come knocking eventually.

Who is your favourite literary bear and why?  But there are so many wonderful literary bears!  How can I pick just one?  Pooh Bear (the real one, NOT Disney's version) was an integral part of my childhood - so he'd be one, and then the icy Bear Prince from East of the Sun, West of the Moon would be another. I love the enquiring, ever innocent, slightly clumsy Pooh for his eternal optimism, love of hunny, and for his bravery in the matter of Heffalumps and Woozles. He is the perfect best friend for Piglet, and I love that generosity of spirit in him too.  The Bear Prince is another matter entirely - wild and free, and yet sad and noble. He'd probably be who my adult heart picked, especially having just read Jackie Morris's brilliant modern re-imagining of him.

I must admit to have a number of them – Alexander is big chief, then I have Albert and an unnamed one too!  Do you have a cuddly bear at home and if so what is his name?  My own beloved childhood teddy - Panda - was stolen by an errant dog and buried in the garden.  My mother never let me see the 'remains', and I still mourn her passing.  I've passed most of my other bears on to my children, all except for Edward, who is a large Steiff bear with worn ears and paws.  He still smells faintly of woodsmoke and home, even after all these years.

Finally, for children who do find story writing challenging do you have any useful tips?  First of all, I'd say, "Read read read read! Ask yourself what you like about your favourite stories.  What are the most exciting bits? What did the author do with the words to make you feel like that?"
Then I'd say, "Ask yourself 'What if...'. Start off by imagining something extraordinary in your ordinary life. 'What if a giant came to my school? Is he a good giant? Is he an evil giant? Is he confused? Clumsy? What would happen if he nearly stepped on a classroom? My best friend? Me? Would I be brave? Would I be the hero? Would someone else be the hero? My teacher? Someone unexpected? Someone who's always been very quiet?'"
Practice by making stories up in your head.  Let's say you're on a bus. Listen to the conversations around you. Look at passers-by. That man driving the digger - is he an alien? That lady discussing what she had for lunch - has she eaten a magic lettuce leaf which will make her hair grow down to her ankles? That kid with the dog - is he an orphan on an adventure, or is he part of a big noisy family with a mad uncle in the attic? Let yourself daydream - some of the best story ideas come up to the surface when you're daydreaming.
Most of all, though, don't try to force a story, and have fun writing it!

Now a question for you - my readers - do you have a favourite childhood bear and what is its name?
Win a signed copy of Bear's Best Friend ...