A new series of seven very short (70-odd pages) novels for teenagers hooked on vampires but not on books.


We are told to read Die Now or Live Forever first as it introduces us to the characters who will feature in five of the remaining novels; teenagers on a camping holiday in Hungary, where they are bitten by mosquitoes which carry vampirism.  From there the books can be read in any order, as a summary of the first story prefaces each subsequent episode. 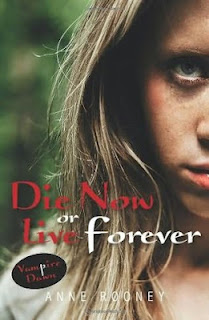 One of the seven stories, Bloodsucking for Beginners, is an instruction manual for those who have become vampires, and it fits in well after either the first book or the last story, as Ignace, the centuries old vampire who, in Die Now, finds the five newly vamped teenagers, concludes that first episode by telling the new vampires that there’s a lot to learn.  But the last story concerns a girl who hasn’t been vamped – or so we think – who might need the manual in the future…

In Bloodsucking ... there are chapters on the A-Z of vampire life, true and false and FAQ's, rehearsing much of the vampire-related information in the novels.  More information about the places, people and science in the books can be found at Vampire Dawn.


I think this is the best book of the series – cleverly constructed and filled with sardonic, tongue in cheek humour as new vampires are told what to do and more importantly what not to do – for example:


…If you have been staked, and are able to do so, call your mentor.


A paramedic de-staking team will be sent to help you.  DO NOT try


remove a stake yourself.  If you can’t get hold of your mentor, call


the Helpline on the local number you have been given.


Despite this humour, serious issues emerge in each book; from Asperger’s to bulimia and even self-harming. Questions of ethics in science, and teenage dilemmas such as relationships with family and friends as well as with girl/boyfriends, sex and sexuality pervade the texts. Indeed we might conclude that Rooney uses becoming a vampire as an allegory for going through adolescence, which at the time can seem just as confusing and life-changing.


Readers need to be aware that this series is not to be confused with a full length novel of the same name by a different author, nor is the series novel In Cold Blood that classic by Truman Capote!

Anne Rooney is a regular reviewer for Armadillo Magazine and we wish her every success with this new series – ed.