Caroline Lawrence Competes for your attention!

Caroline Lawrence will be known to many of you as the hugely successful author of the Roman Mysteries books.  Recently however she has turned her attention to the Wild West and her second P.K. Pinkerton Mystery: The Case of the Good-Looking Corpse has just been published by Orion Books.  A historical mystery series these books take us close to Caroline's home state of California transporting in the 1860s.  Here she talks about moving away from Ancient Rome, the new series and how her inspiration.

When you first began writing your Roman Mysteries what was your inspiration and did you have the whole series mapped out?  My light-bulb moment of inspiration for the Roman Mysteries was ‘Nancy Drew in Ancient Rome’ so I always knew it would be a series, like the Nancy Drew books. But series arcs were starting to come in with TV shows like Buffy the Vampire Slayer and Babylon 5, so I decided to give my series an arc too. My publisher Orion bought six books on the strength of book 1 and blurbs for five possible others. About two years into the series, when Orion said they wanted another 6, I thought of doing a final set of six to make an 18 book series. I was reading Patrick O’Brian’s magnificent Aubrey-Maturin saga at the time and thought it would be hubristic to write more books in my series than there were in his. In the end, the series ended up being 17 books plus two volumes of short stories that fill in the gaps.
﻿﻿﻿﻿
﻿﻿How long before you wrote the last Roman Mysteries book did you know that the series would continue with Roman Mystery Scrolls?  My original idea was a young adult spin-off series called The Flavian Trilogy where I would follow the fortunes of beautiful identical twin boys separated in infancy. Readers will know who I mean! They discover each other during the reign of Domitian and lots of mix-ups and anguish ensues. But my publishers found it too different in tone and content to be a follow-up to the Roman Mysteries.

At a loss for what to do next, I canvassed school librarians. Almost all of them pleaded with me to write something for boys aged 5 to 7, a gap in the market as far as they were concerned, so I thought I might try writing for that age group. I often say that this new younger series set in ancient Rome has ‘more poo and less blood.’

What do you think children in the Roman period were reading, if anything, and do you like to imagine that they really did spend their time investigating mysteries?  If children were lucky enough to go to school or have a tutor, they would be learning Virgil by heart. Homer, too, when they got older. Sadly, I doubt if any of them spent time solving intriguing mysteries. Pliny the Younger might have been one of the few.

The Scrolls are a great concept, how many scrolls have you ever been lucky enough to read?  The only scrolls I have read were parchment scrolls of the Tanach, the Jewish Bible. I did my master’s thesis on a thousand-year-old parchment codex (booklet) of the Book of Esther from the Old Testament written in Syriac, a Christian version of Aramaic.
How you decide on the titles of your books, for example the forthcoming Roman Mystery Scrolls: The Poisoned Honey Cake?  I always find titles challenging so I usually go with my publisher’s choice. But if I were a kid I would totally read a book called The Poisoned Honey Cake.

Do you know how many Scrolls there will be or will you write them until you run out of ideas?  There will be at least four and if they are a success I’ll definitely write at least another four.

Do you want to write any books set in Ancient Greece or other periods of the Ancient World?   Ancient Greece doesn’t really call me because I’ve already referenced plenty of Greek culture, myth and history in my Roman Mysteries! Also it’s not a very women-friendly period of history. And I like my spunky cross-dressing females! 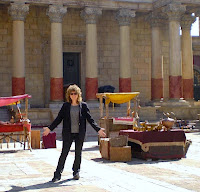 How did you manage the switch and now the parallel writing from the world of the Ancient Romans to the Wild West?  Pretty easily apart from the fact that I knew more about the history of first century Rome than I did about my own native country! But the attractions are the same: deep immersion in the period via travel, films, TV series, books, festivals, re-enactment events, etc…

There are quite a few similarities between the P.K. Pinkerton Mysteries and the Roman Mysteries. Both series are thoroughly researched with lots of facts, artefacts and exciting plots. The stories don’t sugar coat but neither do they show how bad things could really be. My characters in both series are a mixture of made-up people and historical figures. Both series will last about two and a half years; instead of the reign of Titus in the Roman Mysteries, the P.K. Pinkerton mysteries will take place during the “reign of Twain” in Virginia City!
﻿﻿

What was the attraction of the Wild West?  After the ancient world it must have been a big change in scene!  It wasn’t that different! In many ways, 1st century Ostia and 19th century Virginia City are very similar. They are both literate, horse-powered societies, civilized but surrounded by barbarism, and the medical acumen is about the same! Ostia in AD 80 had a population of about 20,000 and was about the same size as Virginia City, Nevada in 1862. That means it is an urban setting but not an overwhelming one. You can walk around both towns, as my husband’s marvellous maps show!

Another attraction was the huge vein of marvellous primary sources and literature available to me. Also the fact that I can see the past (thanks to stereoscopic photographs, a new invention) and hear it (thanks to sheet music).

One thing I’ve discovered is how horribly politically incorrect the Wild West was. It often makes ancient Rome look like a vicar’s tea-party. My period has drinking, smoking, spitting, shooting, whoring, fighting and hoaxing. But of course that’s half the fun.

What made you change the name of the series?  Was it that children were not aware of the wild west and to have a named character was more attractive?  To children born in the last dozen years, “Western” means nothing! To many adults it brings up images of cowboys, cattle drives, lassoes and bleached cow-skulls in Arizona deserts. My books contain none of those elements. They are urban westerns.

We thought that naming the series after a character – even a mysterious and unfamiliar one called “P.K. Pinkerton” – might work better. We have yet to see!

﻿﻿﻿﻿﻿﻿﻿ ﻿﻿﻿﻿﻿﻿﻿ I love the new series, including the look of the books.  It is fun and refreshingly different yet you manage to maintain your flair for writing a gripping and pacey story.  Where do you get the energy from?  Thank you! Energy comes from the nice comments like that! Also from emails and letters from fans. But mostly from the fact that I have a fantastic riverside flat in the heart of London, no kids at home and a wonderfully supportive husband who cooks for me. I recharge my batteries by going for long walks along the river with music (or audiobooks) and also by seeing lots of movies, and by meeting friends for coffee.

I know you are snowed under with writing commitments so I'll keep this short but I am sure readers would love to know how many books you write in a year and how they can get started on the road to be as prolific or as successful as you are!  I guess I write about two books a year. I have three tips: discipline, discipline, discipline! You have got to make yourself sit down and get something on paper and resist the siren call of a thousand other distractions. It is still a battle for me, so don’t be discouraged if it is a battle for you, too.

I have put lots of other writing tips about character and plot structure up on my website. 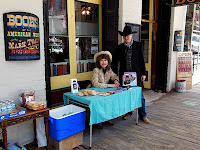 Finally, can you think of a great COMPETITION question for our readers?
“If you could choose one day in history to visit in a Time Machine (a go-anywhere invisible bubble protecting you from arrows etc and them from germs), when and where would it be, and why?”

To be in with a chance of winning a signed copy of Caroline's latest book please send entries to armadilloeditor@gmail.com by Monday 9th July, please remember to include your name and address.  Answers will be posted here, as a blog and winners will be notified by Friday 13th July.

Caroline, thank you so much for guesting on the Armadillo Blog!
Posted by Unknown at 02:13